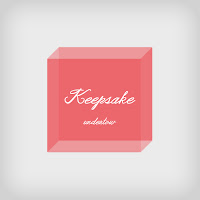 It's the first new release on PopKid in almost 10 years!  Granted, we wish it could be a new slab of vinyl, but we've got plans for that soon.  Next week, for the first time ever, you will be able to get MP3s on Bandcamp for the long lost, never released Keepsake - Undertow 7". PKD008.  We'll spin more tales about this record next week, but just wanted to alert everyone.

Thanks for reading!
Posted by PopKid Records at 4:07 AM No comments: