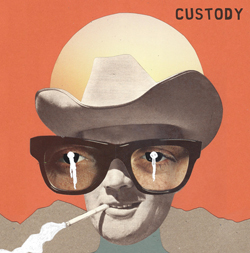 Here at PopKid, we're happy (and somewhat surprised) that we get to announce another new release this year.  Let's just say it has been a long, long time since we've released two records in one year and we couldn't be happier to welcome Custody to the PopKid family.

When Custody got in touch with us, we thought that was pretty neat.  Already fans of the first Custody 7", but having just released the Chestnut Road LP it didn't seem like the best time to put out another record.  Then we heard these two songs and could not say no.  Both are a potent mix of the best parts of Samiam and Starmarket and it was obvious very quickly that Custody fits right in here at PopKid.

The songs will be streaming on Wednesday and the band will also have a video for one of them as well.  On Friday you will be able to buy the 7" from us here in America and from a few other labels if you're elsewhere.  More details on that later this week.

In the mean time, you can also head over to Custody's Facebook page and read their flattering little blurb about PopKid and also get some more information about the other labels that are involved here. See you Wednesday with some music.
Posted by PopKid Records at 3:33 AM